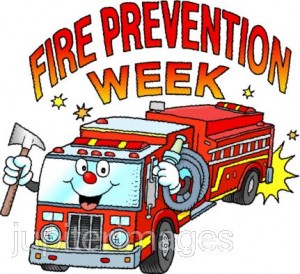 It is Fire Prevention Week. The Garage Plan Shop wants to share six more important tips with you about home fire prevention and fire safety. Practicing these safety tips will decrease the chances of a home fire.

1.    Use Electricity Safely: Check all electrical cords in your home and replace any that are cracked, frayed or show signs of other damage. Do the same for extension cords. If an electrical appliance starts to smoke or smells like it is burning, unplug it immediately. Either repair or replace the appliance. Never run cords under rugs and do not overload outlets or extension cords. Fuses and circuit breakers protect you from fire. Do not tamper with the fuse box or use fuses of the improper size.

2.    Matches and Lighters are not for Children: When in the hands of children, matches and lighters can be extremely dangerous. Store them out of reach and out of view from children. Teach children from early on these items are for adults only. If a child finds matches or a lighter, he or she should tell an adult immediately.

3.    Give Space Heaters Room: Give space heaters plenty of room. They should be placed three feet from anything that can catch fire and burn such as paper, clothing, curtains, bedding and furniture. Turn space heaters off when you leave or go to sleep; do not leave them running. Also, keep children and pets away from space heaters to prevent them from getting bumped and toppling over.

4.    Be Careful and Attentive When Cooking: Use the utmost care and attention when cooking. Never leave anything cooking unattended. Keep all cooking areas clear from combustibles including outdoor kitchens and grills. Turn handles of pots and pans inward one the stove to keep them out or reach of children and prevent someone from bumping the handle and knocking the pot or pan off the stove.

5.    Cool a Burn: If someone should get burned, immediately place the wound in cool water for 15-20 minutes to relieve the burning sensation and pain. If the burn blisters, chars or becomes an open wound, seek medical attention right away.

6.    Learn and Practice Candle Safety: Though candles smell nice and look pretty, they are becoming a growing household hazard when home fires are considered. Use common sense with lit candles. Never leave a burning candle unattended in any room in the house, even if you are in the next room. Do not burn candles when you go to bed or leave your home. Never place a lit candle near combustibles such as clothing, paper, curtains or bedding. Lit candles should be placed out of reach of children. Do not burn candles in low places or on unsteady surfaces like the coffee table or end tables where they can easily be knocked over by people or pets.

Even though Fire Prevention Week will be over soon, it is important to practice these safety tips year round in an effort to prevent a fire in your home.

One response so far

The Garage Plan Shop has a few fire safety tips to share with you for Fire Prevention Week. These tips and safe practices will help protect you, your family, your pets and your home from potential home fire damage and injury. Be smart and follow safe fire prevention practices.

2.    Plan Your Escape and Practice: If a fire breaks out in your home, get out fast! Once you are out of the house, DO NOT go back inside. Plan two escape routes from each room in the home and choose a specific meeting place outside the home where the entire family can gather (i.e. the mailbox across the street or a neighbor’s driveway.) Practice your escape plan at least two times a year with all family members.

3.    Learn and Practice STOP, DROP and ROLL: Even small children can learn this basic lifesaving rule. If your clothes or you body catches on fire, do not run. Instead, stop where you are, drop to the ground or floor and roll over and over to smother the flames. Also, cover your face to protect it and prevent lung damage by inhaling smoke. Practice this technique with every family member.

4.    Crawl Low Below Smoke: If you encounter smoke following your primary escape route, use your alternate route. However, if you must travel through smoke, drop to the floor or ground and crawl on your hands and knees. Clean air will be just above the floor.

Following these fire safety practices will increase your chances of escaping death or injury in a fire. Look for more information about fire prevention and safety in an upcoming Garage Plan Shop blog.

·         Approximately 75% of all homes in the United States have at least one working smoke alarm.

·         The results from a 2008 telephone survey reported, only 12% of participants knew smoke alarms should be replaced every 10 years.

·         Heating is the second leading cause of house fires, fire deaths and fire injuries.

·         Electrical malfunctions and failures are factors in nearly 50,000 reported fires every year.

These facts about home fires and smoke alarms are alarming. Don’t wait any longer! Now is the time to practice fire safety and fire prevention at home. Look for our upcoming blog filled with information you can use to protect yourself, your family and your home form a potential house fire.